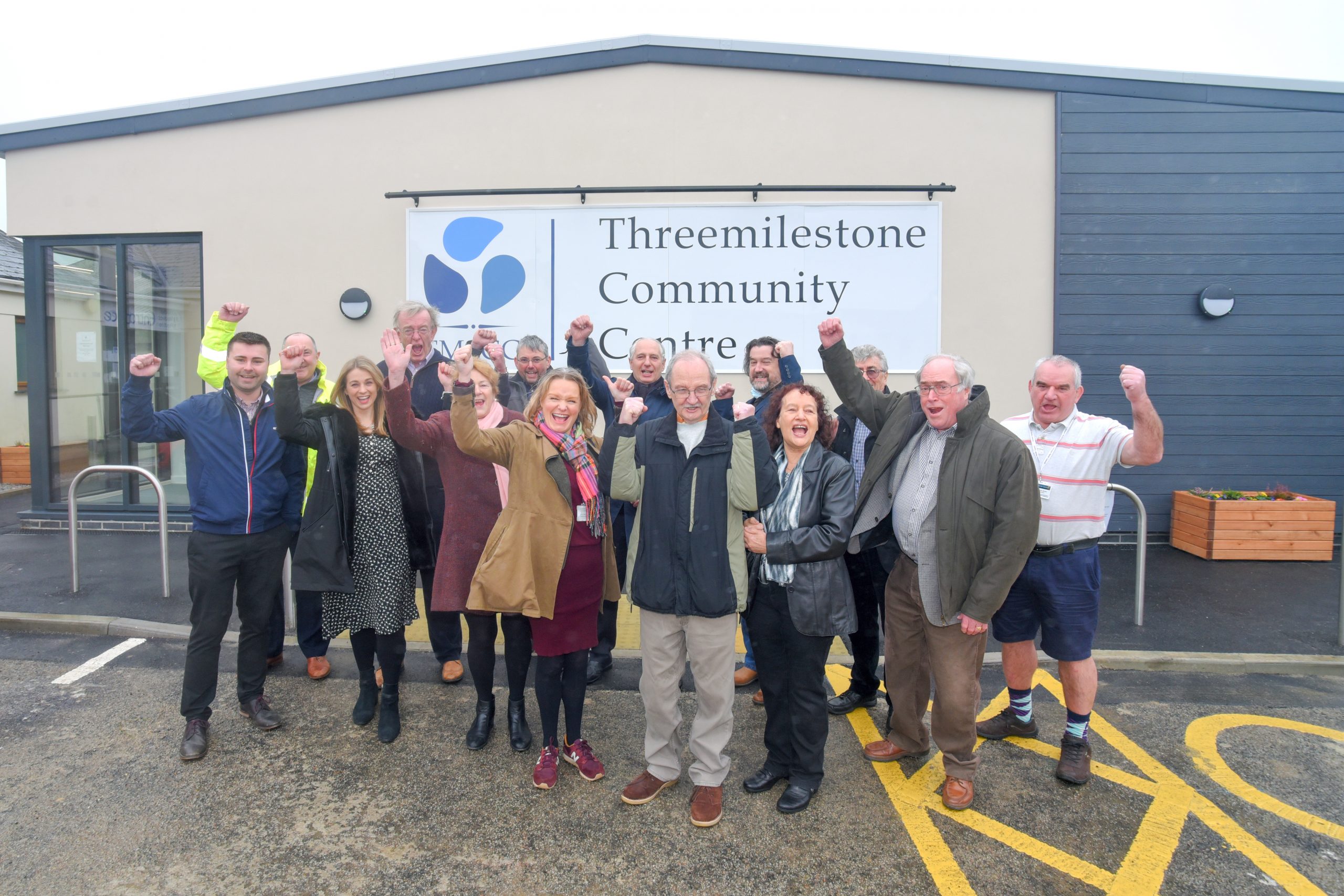 Saturday, 29 January was a real red letter day for Threemilestone as the village’s Community Centre officially re—opened to the public following the completion of its new extension.

You can watch a short film about the re-opening here : https://youtu.be/oC5tq96m5X8

Funded by Cornwall Council, the extension provides a range of new facilities, including an external accessible toilet which will help to address the previous lack of public toilet provision in the village. There is also a new entrance foyer which will also act as a meeting place, new internal accessible toilets and baby changing facilities; together with new cycle loops, planters and seating in the area outside the building.

The trustees of the Community Centre also provided additional funding for Covid improvements to compliment the extension and ensure that the building meets the latest Government guidance. These included installing new specialised hospital grade air filters to all the function rooms to improve ventilation within the building, together with new input fans.

Work on the extension was completed last week, with the building handed back by the contractors on Friday, 21 January.

The official ribbon cutting ceremony, carried out by local Cornwall Councillor Dulcie Tudor, took place on Saturday morning and was followed by an Open Day for the local community.

The opening ceremony was attended by Mike Ashcroft, Chair of the Threemilestone Community Centre and other trustees; together with Cornwall Council Leader Linda Taylor and David Harris, Cornwall Council’s Cabinet Member for Resources and the local member for Gloweth, Malabar & Shortlanesend, Councillor Derek Green, Kenwyn Parish Council and representatives from the contractor MIDAS.

“I am delighted by the completion of the new extension to the Community Centre “ said Mike Ashcroft. “Achieving this during a global pandemic was extremely difficult and I would like to pay tribute to the many people and organisations who worked together to make it happen”.

“These welcome improvements to our community centre will benefit all residents and other users from both within and outside the village and we are very grateful to everyone who has contributed to turning our long awaited plans into reality.”

Although Threemilestone already had a very successful Community Centre, the original hall was built to support around 1,000 people in the 1970s. With a population which had increased to more than 4,000, and the village continuing to grow, it was no longer big enough to cater for all the organisations which want to use it.

In 2020 Cornwall Council confirmed plans to extend and upgrade the Community Centre as part of a wider programme of community investment projects aimed at ensuring that local facilities and services in existing communities such as Threemilestone do not come under pressure as a result of the Langarth Garden Village scheme.

Since then the Council has been working with local residents and councillors, the contractors Midas Limited and the Langarth project team to deliver the much needed project.

Welcoming the completion of the works, Cornwall Council Leader Linda Taylor said “When Cornwall Council made the decision to take on a proactive role in planning and delivering the new integrated community at Langarth, we wanted to ensure that the scheme supports improvements for existing residents as well as new ones.

“Improving the Community Centre at Threemilestone will bring great benefits to Threemilestone, providing more space for community events and enhancing the aesthetic appeal of the building which lies at the heart of the village.”

Local Cornwall Councillor Dulcie Tudor has been closely involved with the development of the extension.  “The completion of the public toilets and extension to the Community Centre marks a positive beginning to a much needed upgrade of the village. They are just two of five projects I have secured for Threemilestone.

“Over the next few years, as Langarth Garden Village is built out, we will see a new Sports Hall for the local primary school, more car parking, a new, safer road layout in the centre of the village and sports pitches enabling Threemilestone Football Club to play locally. The re-opening of the Community Centre is a great start!”

The new extension was built by the Indian Queens-based Cornwall and Devon division of Midas Construction, part of the Midas Group.

Mark Jones, Operational Director for Midas, said “As a locally-based team ourselves, it has been fantastic to play our part in delivering these enhanced facilities which we know will bring significant benefits to the community both now and into the future. We’re proud of what has been achieved in co-operation with the trustees and all the project partners and look forward to seeing the building being brought to life.”

The building is used by the local community for a wide range of sporting, activity, club and other social events. These include education and training courses, local markets, arts and crafts activities, exercise classes, including keep fit and dancing, performances, and a range of contact sports. The centre also includes a bar and kitchen which enables people to socialise and host family and other celebrations and events.

Further plans for the village include removing the central roundabout, providing more parking spaces to improve access to local businesses and health services and a new pedestrian and cycleway link to connect Threemilestone village directly to the new Langarth Garden Village. All of this will be complemented by new green spaces, landscaping and tree planting.