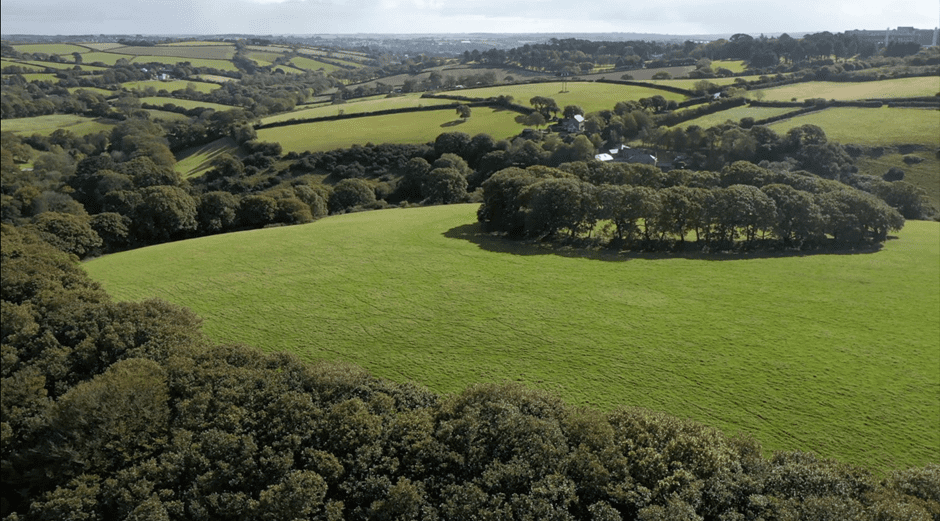 Cornwall Council has finalised the purchase of Governs Farm, securing the future of the historic Governs Round and nearby Ancient Woodland, and paving the way for the creation of a new area of public open space with hundreds of new native trees being planted to replace those previously removed by farming.

What is Governs Round?

A designated scheduled monument dating back to between the later Iron Age and the early post-Roman period, the small, embanked and ditched enclosure with its distinctive circle of mature oak trees has a significant impact on the local landscape.

Located 500m north-east of Governs and 200m north-west of Penventinnie, the site retains important archaeological evidence of its construction, the lives of its inhabitants and the landscape in which they lived.

With the first recorded reference to the site dating back to 1841, when it was shown on the Kenwyn parish Tithe Map and called ‘Ancient Fort’, Governs Round is part of a wider prehistoric landscape that contains hillforts, barrows, enclosures and earthworks.

While the round was not included in the area covered by the previous planning permissions granted to private sector developers, there was a significant risk of its setting being affected by unsympathetic development.  There was also no public open space attached to those developments and very limited public access to the Round.

How is the Council protecting the Round?

One of the key aims of the Council’s involvement in the Langarth Garden Village scheme has been to protect and enhance heritage features on the site, as well as preserving traditional field pattens and Cornish hedges wherever possible.

The plans for the Garden Village have been designed to protect the immediate setting of the round, leaving it undisturbed through the creation of a generous amount of public open space and green infrastructure all around it.

During the first phase existing wooded areas, including the Ancient Woodland and the ring of trees, will be protected and enhanced with a new forest of native trees and areas of ‘natural’ green space provided on an area of low quality grassland – transforming Governs into the ‘green lungs’ of the Garden Village.

Future phases of the scheme will see allotments, community gardens and orchards developed on other parts of the former farm. It will also be home to the second outdoor primary school planned for the scheme, with new foot and cycle paths enabling more people to access the site.

What else is planned for the site?

Other plans for the site include renovating and repurposing the existing farmhouse, and locating future housing development at the southern edge of the site where it complements the Garden Village scheme.

If planning permission is granted for the Garden Village, a robust stewardship scheme will be put in place to ensure that the Governs area is protected and maintained and access to the round is controlled.

While the round is of significant archaeological importance, there are currently no visible markers in the landscape to help the public understand its relationship to the wider prehistoric landscape. This means that knowledge is only available to a small number of people.  Sensitive interpretation and appropriate signage will help to provide wider recognition and greater understanding of the site, and explain its history to future inhabitants of the Garden Village.

Including Governs Farm and the round within the Garden Village will provide a significant increase in public green space, and protect the heritage of this very special area as well as supporting the creation of the Forest for Cornwall.